Laura Gibbs · 68. The Story of Sunda and Upasunda
The rishi Narada visited Yudhishthira's court at Indraprastha, and he told the Pandavas this story as a warning:
The twin asura brothers, Sunda and Upasunda, tormented the world. No creature, mortal or immortal, could defeat them.
The god Brahma then created a perfectly beautiful apsara: Tilottama.
Dressed in a sari of red silk, she danced before the brothers. They were captivated.
"She's mine!" shouted Sunda.
"No!" shouted Upasunda. "She's mine! I saw her first!"
"No!" shouted Sunda. "I saw her first!"
Because the brothers were equally strong, they killed each other as they fought.
The Pandava brothers heeded Narada's warning.
Inspired by: The Mahabharata: A Shortened Modern Prose Version by R. K. Narayan
Notes: This story is from Chapter 5: Uncle's Gift. You can read a full version of the story of the demons, or daityas, here: Rajya-labha Parva. In other versions, Shiva and Parvati are involved: Sunda and Upasunda. 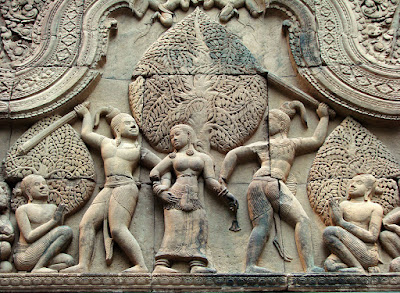