Laura Gibbs · 11. Bhishma Goes to the Swayamvara
Bhishma went to the kingdom of Kashi, where King Kashya was holding a swayamvara for his three daughters: Amba, Ambika, and Ambalika. The king had invited many princes to the competition, but not Vichitravirya.
Bhishma, however, was determined that the princesses would marry his half-brother. So, before the competition even began, Bhishma rushed into the assembly, surprising everyone. He grabbed the three princesses and raced away in his chariot, fighting off the angry princes who pursued him.
Bhishma's rivals were disappointed, and none more so than Prince Shalva, who was secretly betrothed to the eldest of the three princesses, Amba.
Inspired by: The Mahabharata: A Shortened Modern Prose Version by R. K. Narayan
Notes: This story is from Chapter 1: The Eighth Baby. In Pattanaik's Jaya, p. 36, he speculates the Vichitravirya was for some reason an unfit groom, and hence was not invited (Bhishma not being invited because of his vow of celibacy): "The name Vichitravirya is derived from "vichitra" meaning odd and "virya" meaning masculinity, suggesting that Vichitravirya was either a weakling or impotent or sterile, or perhaps asexual or homosexual, lacking manliness, unable or unwilling to get a bride for himself." 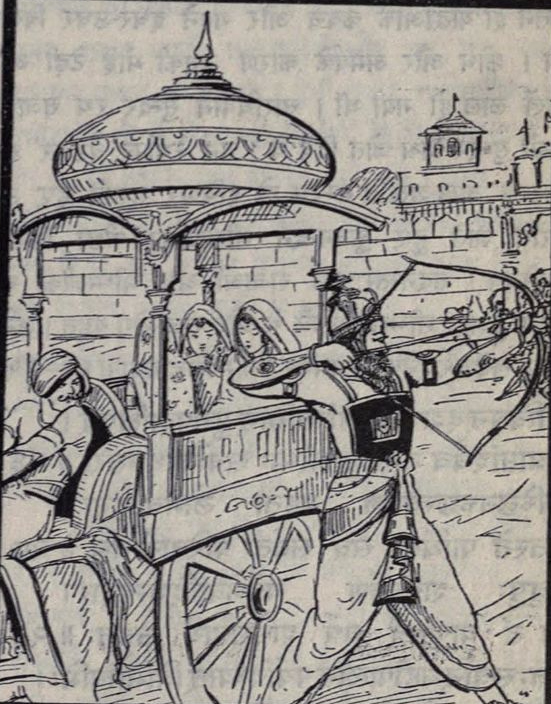