Laura Gibbs · 53. The Pandavas Escape
When the Pandavas and Kunti emerged at the other end of the tunnel, they met a boatman who was waiting for them as Vidura had arranged, and they gave the watchword: "The wise jackal's den has more than one exit."
This boatman took them across the river, and they then fled deep into the forest. Their plan was to hide in the forest, disguised as brahmins, keeping as far from Duryodhana and his spies as they could.
Meanwhile, back in Hastinapura, King Dhritarashtra mourned his nephews in public, but privately he rejoiced with his son Duryodhana.
Vidura, meanwhile, kept silent.
Inspired by: The Mahabharata: A Shortened Modern Prose Version by R. K. Narayan
Notes: This story is from Chapter 3: House of Joy—and Ashes. 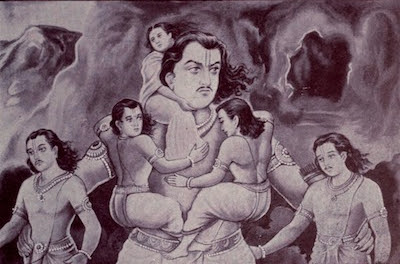