Laura Gibbs · 54. Bhima Fights a Rakshasa
As they wandered the forest, Bhima would stand watch over his mother and brothers while they slept.
One night, a rakshasa named Hidimba approached them. "I smell humans!" he said to his sister, Hidimbi. "Lure that big one in my direction. I'll kill him, and we will enjoy a feast!!"
But when Hidimbi saw Bhima, she fell in love. While Bhima and her brother fought, she used supernatural powers to protect Bhima, and he killed her brother.
Bhima then married Hidimbi, and she bore their son: Ghatotkacha.
"If you ever need me," Ghatotkacha told Bhima, "call, and I will come."
Inspired by: The Mahabharata: A Shortened Modern Prose Version by R. K. Narayan
Notes: This story is from Chapter 4: Bride for Five. In Pattanaik's Jaya, p. 80, he notes that Hidimba was Baka's brother, and that Hidimba recognized Bhima as his brother's killer. 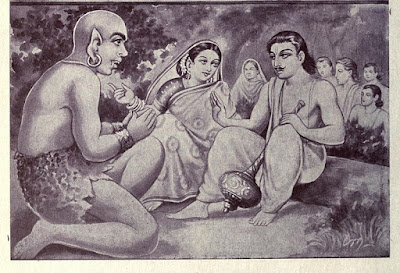