Laura Gibbs · 52. The House in Varanavata Burns
The royal administrator in Varanavata, Purochana, was Duryodhana's agent. The Pandavas knew he planned to kill them in a fire.
"We'll beat him to it," said Yudhishthira, and he ordered Bhima to set the palace on fire.
The Pandavas escaped through their tunnel, while Purochana died in the flames.
A mother and her five sons also died in the fire. They had come to the palace seeking food and drink, and there they fell asleep, intoxicated.
The next day, when their charred remains were discovered, Duryodhana was delighted, thinking the Pandavas and their mother Kunti had died in the fire.

Inspired by: The Mahabharata: A Shortened Modern Prose Version by R. K. Narayan
Notes: This story is from Chapter 3: House of Joy—and Ashes. Narayan actually does not have the Pandavas arrange for the family to be burned in their place, but that is in the Sanskrit Mahabharata; online in English here. 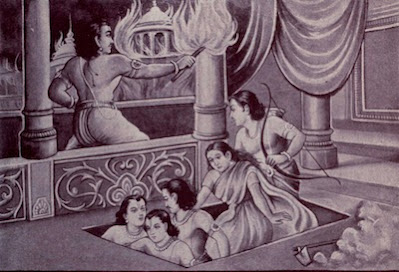