Laura Gibbs · 22. Pandu Goes Hunting
While hunting, Pandu shot a stag in the act of love. The stag was in fact a rishi named Kindama, and the doe was his wife. They had transformed into deer to make love in the forest.
As he was dying, Kindama cursed Pandu. "You will die, just as I am dying, if you ever touch a woman again."
Pandu realized he would never be able to have a son, so he renounced the world and went to live in the wilderness. His devoted wives, Kunti and Madri, went into the wilderness with him.
Thus Dhritarashtra became king after all.
Inspired by: Jaya: An Illustrated Retelling of the Mahabharataby Devdutt Pattanaik.
Notes: This story is on p. 45. 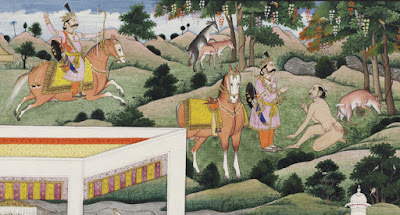