Laura Gibbs · 108. Draupadi Seeks Protection
Draupadi appealed to Queen Sudeshna. "Dear Sairandhri," she said, "my brother Kichaka is harmless, I assure you."
Draupadi, however, knew she was in serious danger. She threw herself on the king's mercy, but he ignored her, and Yudhishthira, who was playing dice with the king at the time, said nothing.
Draupadi felt betrayed once again, as she had at the dice game in Hastinapura years ago.
But this time, Bhima came to her aid. "I will protect you, Draupadi," he said, and he told Draupadi to invite Kichaka to the dancing hall that night. "I'll do the rest," Bhima promised.
Inspired by: The Mahabharata: A Shortened Modern Prose Version by R. K. Narayan
Notes: This story is from Chapter 9: Hundred Questions. 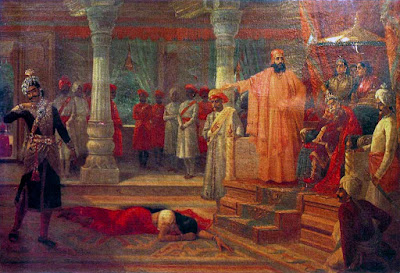