Laura Gibbs · 109. Bhima Kills Kichaka
"Come to the dancing hall tonight," Draupadi told Kichaka. "I'll show you my special dance."
The hall was dark when Kichaka arrived. "Sairandhri," he cooed, "where are you?"
"HERE!" boomed a voice. It was Bhima, who grabbed Kichaka and squeezed him to death, crushing him into a big ball of flesh.
Suspicion fell on Draupadi, and King Virata threatened to throw her on Kichaka's funeral pyre.
"I warned him about my powerful gandharva husbands," Draupadi protested, "but he didn't listen!"
Now King Virata was afraid too, and he spared Draupadi.
Thus Draupadi and the Pandavas remained in the king's service.
Inspired by: The Mahabharata: A Shortened Modern Prose Version by R. K. Narayan
Notes: This story is from Chapter 9: Hundred Questions. 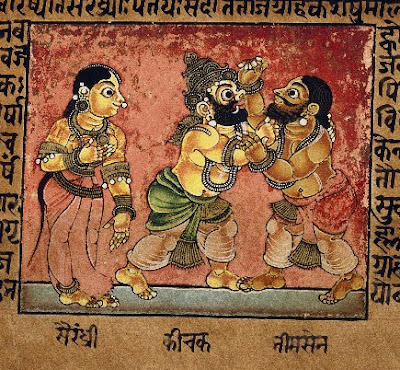