Laura Gibbs · 150. Bhima Fights Karna
The next day, Bhima killed twelve more of Duryodhana's brothers. "I will kill them all," he thought to himself, "Duryodhana and all his brothers!"
Then when Bhima saw Karna, he turned his chariot to pursue him, but Karna shattered Bhima's bow, broke his mace, and killed Bhima's charioteer. Bhima then had to hide behind the carcasses of war-elephants that littered the battlefield.
"Go back into the forest where you belong!" Karna yelled.
But as he had promised Kunti, Karna did not kill Bhima. Arjuna was the only one of the Pandavas that Karna was going to fight in mortal combat.
Inspired by: The Mahabharata: A Shortened Modern Prose Version by R. K. Narayan
Notes: This story is from Chapter 15: Delirium of Destruction. 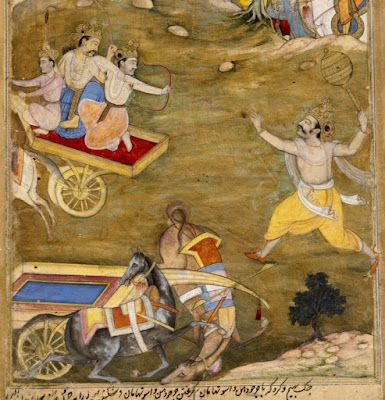