Laura Gibbs · 152. The Rakshasas Attack
Bhima's son Ghatotkacha led his rakshasas in an assault on the Kauravas. Using their powers of illusion and supernatural weapons, the terrifying rakshasas routed the Kauravas.
"Save us, Karna!" Drona shouted. "Use the Shakti-spear to kill Ghatotkacha."
"But I can use that spear only once," Karna protested; he had planned to use it against Arjuna.
"Use it now!" Drona ordered.
So Karna launched his celestial spear at Ghatotkacha. Fatally wounded, Ghatotkacha rose in the air, expanded in size, and then hurtled down to the ground, crushing thousands of Kaurava soldiers as he fell.
Thus died Ghatotkacha, Bhima's devoted rakshasa son.
Inspired by: The Mahabharata: A Shortened Modern Prose Version by R. K. Narayan
Notes: This story is from Chapter 15: Delirium of Destruction. 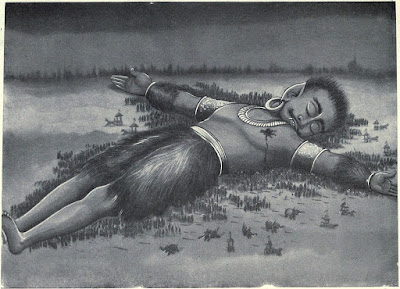