Laura Gibbs · 55. Bhima Fights Baka
In their wanderings, the Pandavas met their grandfather Vyasa. "Go to the village of Ekachakra," he advised them.
The villagers there told the Pandavas that a deadly rakshasa named Baka demanded a cartload of food daily. He ate the food, and the driver too!
Bhima agreed to drive the cart, being eager to eat the food himself.
As Bhima sat on the cart eating, Baka attacked. "That's my food!" he shrieked.
Bhima just laughed.
They wrestled, and Bhima finally killed Baka.
The villagers wanted to honor their saviors, but the Pandavas decided to move on before their identity was discovered.
Inspired by: The Mahabharata: A Shortened Modern Prose Version by R. K. Narayan
Notes: This story is from Chapter 4: Bride for Five. 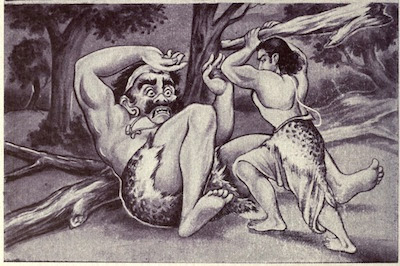