Laura Gibbs · 99. Arjuna Encounters a Hunter
Arjuna ascended a sacred mountain and meditated deeply, praying to Shiva.
As he prayed, a boar attacked.
Arjuna emerged from meditation, grabbed his bow, and shot the boar.
To Arjuna's surprise, another arrow struck the boar. "The boar is mine!" shouted a hunter emerging from the trees.
"No!" protested Arjuna. "It's mine!"
They fought, and Arjuna could not overcome this hunter. He appealed to Shiva for help, throwing a garland on the Shiva-statue he had made.
The garland appeared around the hunter's neck!
"You are Shiva!" Arjuna shouted, bowing down.
Shiva was pleased and rewarded Arjuna with the Pashupata weapon.
Inspired by: The Mahabharata: A Shortened Modern Prose Version by R. K. Narayan
Notes: This story is from Chapter 8: Wanderings. Narayan tells this story in just a couple of sentences, so I expanded on it. See the Vana Parva. In Pattanaik's Jaya (p. 167), he notes that the boar itself was a manifestation of Shiva's bull Nandi. 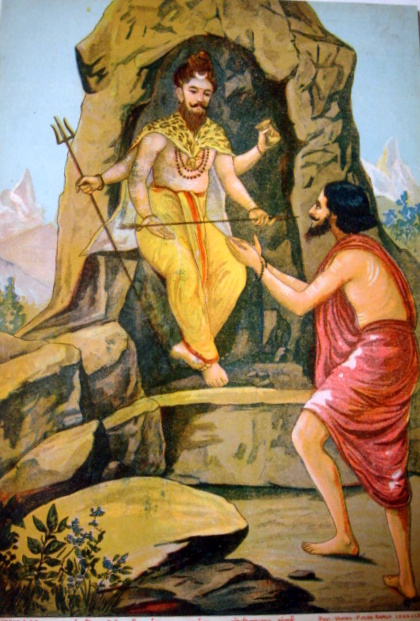