Laura Gibbs · 184. Sita Gives Birth
While living in Valmiki's ashram, Sita gave birth to her twins.
Valmiki performed a ritual with kusha grass to protect the first-born son. "This child will be named Kusha," said Valmiki, and Sita smiled.
Valmiki had saved a portion of kusha grass for the second son. He performed the ritual again, and said, "This child will be named Lava," ("Lava" means "portion"). Sita smiled again.
The boys grew up in Valmiki's ashram, and later Valmiki taught them the song he had composed, the Ramayana, the song of their father's adventures, but the boys did not know Rama was their father.

Inspired by: Valmiki's Ramayana.
Notes: This is the Uttara Kanda (Book 7), sarga 58. 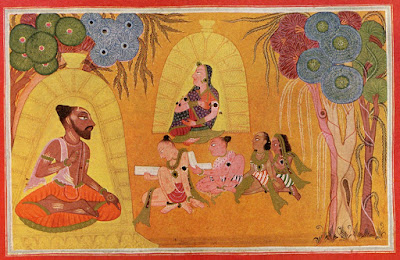