Laura Gibbs · 159. Rama Battles Taranisen
Across the battlefield, Rama saw a rakshasa ferociously attacking the monkeys and bears. As he watched, Rama realized the rakshasa was tattooed all over with his name.
"How strange!" Rama said to Vibhishana. "Who is that?"
"He is Taranisen," Vibhishana explained, "and he worships you. He bears your name everywhere, but not on his teeth. Strike him in the teeth, and he will fall."
Rama plunged into battle and struck the strange warrior in the teeth, thus killing him.
After the battle, Rama asked Vibhishana, "How did you know about his teeth?"
"Because," Vibhishana said sadly, "he was my son."
Inspired by: Sita: An Illustrated Retelling of the Ramayana by Devdutt Pattanaik.
Notes: This story is on p. 235 of the book. The story of Taranisen comes from the Bengali Ramayana of Krittivasa. 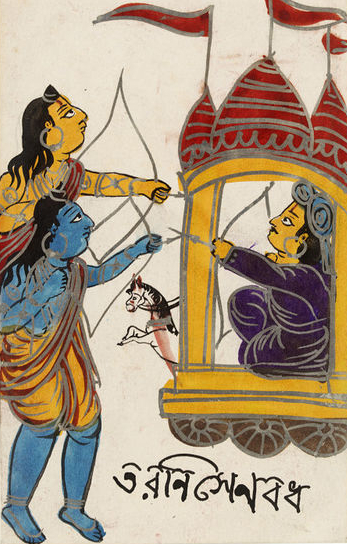