Laura Gibbs · 158. Indrajit's Wife Comes to Rama
Lakshmana's arrow severed Indrajit's head with such force that it flew through the air and landed at Ravana's feet.
"Forgive me, Father," said the head. "I failed you." Then the head spoke no more.
Sulochana, Indrajit's wife, was determined to cremate Indrajit's head and body together.
She walked fearlessly across the battlefield until she found Indrajit's body.
"Indrajit was an obedient son, like you," she said to Rama, "and I am a faithful wife, like Sita. I beg you: let me take my husband's body away from here."
Rama agreed, and Sulochana carried Indrajit's body away, grieving for her husband.
Inspired by: Sita: An Illustrated Retelling of the Ramayana by Devdutt Pattanaik.
Notes: This story is on p. 232 of the book. Sulochana is also called Pramila. Some say she was a Naga, and Lakshmana's famed naga-pasha was her gift to him. In some versions of the story, she commits sati, burning herself on Indrajit's pyre. 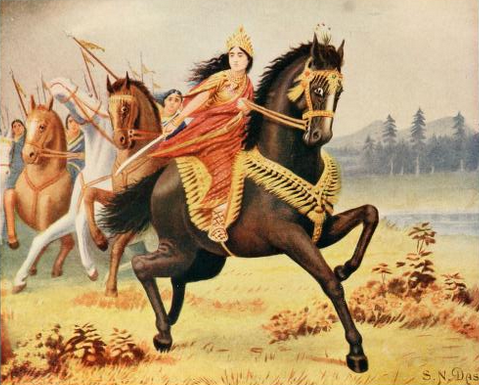