Laura Gibbs · 6. Shiva Rewards Ravana with a Queen
Shiva offered Ravana another reward. "Tell me what you want," Shiva said.
"I want her!" said Ravana, pointing to the beautiful woman standing beside Shiva. She was the devi Parvati, Shiva's wife, but Ravana did not know that. He only knew that she was beautiful and that he wanted her.
Shiva had to grant his wish, but Parvati found a way out. She grabbed a frog and went to see Brahma. "Make this frog ["manduka"] into a double of me," she said.
Brahma did so, and that was the woman Ravana took to Lanka.
This was Mandodari, Ravana's chief wife.
Inspired by: Sita: An Illustrated Retelling of the Ramayana by Devdutt Pattanaik
Notes: This story is on p. 140 of the book. The story of manduka (frog in Sanskrit) and Mandodari comes from the Manduka Shabda, a 13th-century court dance. There are other legends about Ravana and Parvati's double; see Mandodari the Frog-Queen. Pattanaik also tells the story of how Ravana built a palace for Shiva on Kailash, and when Shiva asked Ravana what he wanted as a reward, Ravana asked for the palace itself, which Shiva relocated to Lanka. 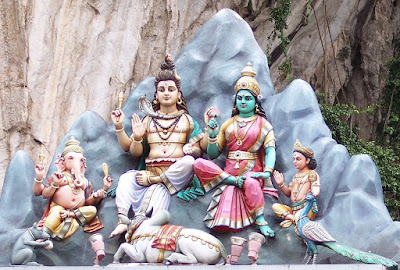