Laura Gibbs · 134. Ravana Seeks Advice
Ravana summoned his ministers. "Advise me about Rama, the human who sent that monkey to our city."
The rakshasas told Ravana there was nothing to fear, but Ravana's brother Vibhishana did not agree. "There have been many ill omens," he said. "Snakes have coiled around the sacred poles. Ants have infested the holy offerings. The cows give only curdled milk, and the horses weep. Crows are flocking to the rooftops. Vultures are circling. Jackals are howling."
All that Vibhishana said was true, but Ravana grew angry and sent him away. "Sita is mine!" Ravana shouted. "I will never surrender her."
Inspired by: Valmiki's Ramayana.
Notes: This is the Yuddha Kanda (Book 6), sarga 6 and following. Vibhishana's speech is in sarga 10. Later in sarga 15, Vibhishana again tries to persuade Ravana and is rebuffed. 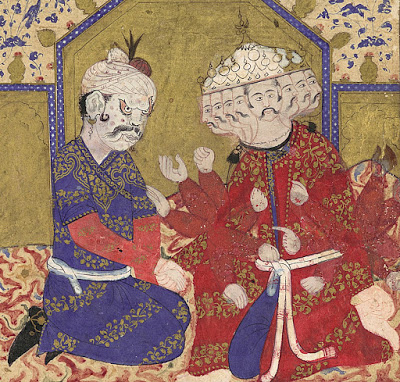 Ravana and his ministers