Laura Gibbs · 83. Rama Realizes the Danger
When Rama shot the golden deer, the deer shouted out in Rama's own voice, "Sita! Lakshmana! Help me!"
Then Rama saw Maricha in his rakshasa form arise out of the golden deer and collapse on the ground in a pool of blood. Recognizing Maricha, the son of Tataka whom he had fought in the forest long ago, Rama realized Sita was in terrible danger. He raced back to the hut, as did Lakshmana, but Sita was gone.
They found the wounded Jatayu who, with his last breath, whispered, "He took her."
Jatayu died, and Rama conducted his funeral, weeping bitterly.

Inspired by: Valmiki's Ramayana
Notes: This is the Aranda Kanda (Book 3), sarga 44 and then sarga 67 for the meeting with Jatayu. Valmiki tells us that, in his crazed grief, Rama at first thinks that Jatayu is a demon who has eaten Sita. 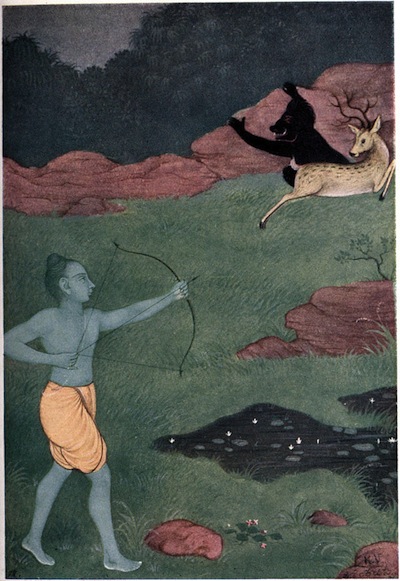