Laura Gibbs · 61. Rama Visits Sutikshna
The exiles came to the ashram of the rishi Sutikshna, and he invited them to stay there.
Meanwhile, they heard a loud roaring in the woods. "What's that?" asked Sita, frightened.
"Many wild animals live here," Sutikshna explained. "They make a ruckus, as you can hear, but they do no harm."
"I will kill those wild animals!" Rama declared.
"Oh no, great prince!" said Sutikshna. "There's no need to kill them. We seek peace here, even in the forest."
Rama pondered the rishi's words, and after a time they moved on, visiting the ashrams of other rishis in the forest.
Inspired by: Valmiki's Ramayana
Notes: This is the Aranya Kanda (Book 3), sarga 7. In other versions of the story, Sutikshna describes rakshasas who attack and kill the sages, which prompts Rama to vow that he will destroy the rakshasas everywhere. In Valmiki's Ramayana, Rama and Sita debate the killing of rakshasas in sarga 9 and sarga 10.
Rama at Sutikshna's hermitage: 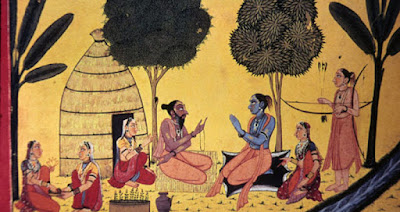