As Rama and Lakshmana searched for Sita, they encountered Kabandha, a ravenous monster whose head was in his stomach. He grabbed anything that moved and shoved it into his stomach-mouth.
Rama and Lakshmana fearlessly sliced off Kabandha's arms. As he lay dying, the monster thanked them. "I was once a gandharva named Vishwavasu," he said, "ravenous for music, food, drink, everything. My all-consuming greed turned me into a monster, but now I am free."
When Rama and Lakshmana cremated Kabandha's corpse, his gandharva form emerged. "Seek the monkeys of Kishkindha. They will help you," he said, ascending into the sky.
Inspired by: Sita: An Illustrated Retelling of the Ramayana by Devdutt Pattanaik
Notes: This story is on p. 161 of the book. In Valmiki's Ramayana, this is the Aranya Kanda (Book 3), sarga 69. 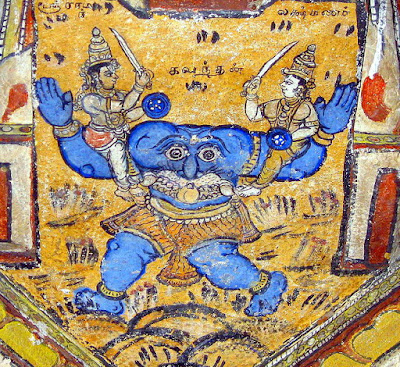