Laura Gibbs · 146. Indrajit Attacks
Ravana's soldiers carried the usual weapons of war, while Rama's soldiers wielded trees and rocks, fighting with their teeth and claws. The armies clashed day after day, and blood flowed everywhere, the blood of rakshasas mingling with the blood of monkeys and bears.
Ravana's son Indrajit then used his invisibility to penetrate Rama's defenses. He appeared out of nowhere, attacking the princes with his serpent-arrows. "Die!" he shouted. "Die, both of you!"
As they writhed in agony, pinned to the ground by Indrajit's arrows, Indrajit disappeared as suddenly as he had appeared.
The monkeys and bears all howled in despair.

Inspired by: Valmiki's Ramayana.
Notes: This is the Yuddha Kanda (Book 6), sarga 42. Indrajit's attack is in sarga 44. 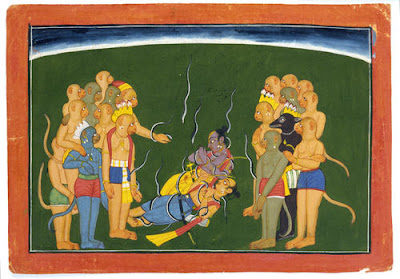