Laura Gibbs · 145. Rama Sends Angada to Ravana
After Rama and his army marched across the bridge to Lanka, they built camp.
Then Rama sent the monkey Angada to Ravana on a diplomatic mission. "Tell Ravana this: free Sita, and we will depart in peace."
Angada went to the palace, but Ravana ordered his guards to seize Angada and kill him.
Angada broke free and jumped to the roof of Ravana's palace, punching holes in the roof with his fists and stamping with his feet until the roof collapsed.
Angada then leaped back to Rama. "There can be no peace with Ravana," he explained. "There will be war."
Inspired by: Valmiki's Ramayana.
Notes: This is the Yuddha Kanda (Book 6), sarga 41. In some versions, as in this illustration, Angada steals Ravana's crown: 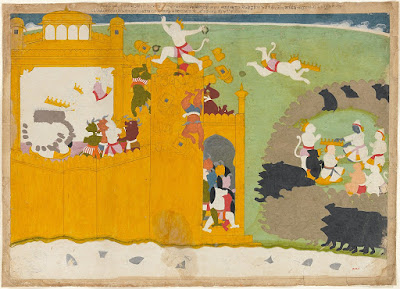