Laura Gibbs · 157. Lakshmana Confronts Indrajit
Indrajit returned to Lanka for his chariot and then rode back into battle, determined to kill both Lakshmana and Vibhishana.
When Lakshmana saw Indrajit approaching, he launched an arrow that killed Indrajit's charioteer, and Vibhishana killed all four of Indrajit's horses.
Indrajit and Lakshmana then clashed on foot, raining down arrows on one another.
"I have vowed to kill you!" Lakshmana shouted, invoking Rama as he nocked an arrow.
Lakshmana fired, and the arrow severed Indrajit's head.
Thus Lakshmana fulfilled his vow.
He killed Indrajit.
All the monkeys and bears rejoiced, and Rama embraced his victorious brother, full of gratitude.
Inspired by: Valmiki's Ramayana.
Notes: This is the Yuddha Kanda (Book 6), sarga 89. 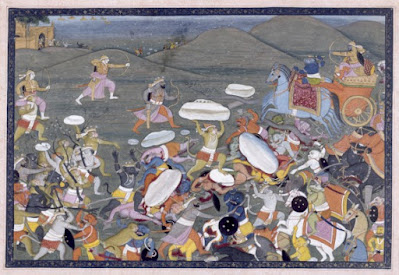