Laura Gibbs · 122. Hanuman Addresses Sita
As Sita prepared to hang herself, she experienced powerful omens that gave her hope: her left eye quivered, as did her left shoulder and her left leg.
"I won't despair!" she vowed out loud.
Then, to her surprise, a voice spoke forth from the ashoka tree. "There was a king named Dasharatha," Hanuman began, "whose eldest son was named Rama." Hanuman narrated the events of Rama's exile and Sita's abduction, and then how Rama allied himself with the monkey-king Sugriva and sent the monkeys out in all directions to find her.
"And that is how I came here!" Hanuman said.
Inspired by: Valmiki's Ramayana
Notes: This is the Sundara Kanda (Book 5), sarga 29 and following. 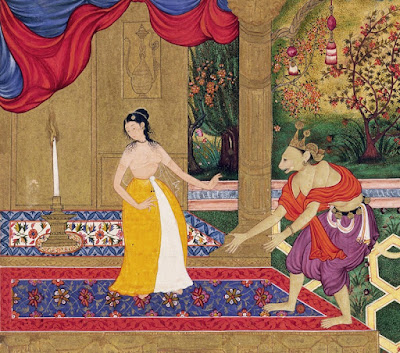