Laura Gibbs · 54. The Exiles Depart
Wearing clothes of bark, Rama, Sita, and Lakshmana began their exile. A charioteer drove them to the river, while the people of Ayodhya followed.
"Go home, men and women of Ayodhya!" Rama said. But the people did not leave.
In the night, Rama, Sita, and Lakshmana departed while the people slept. Guha, the chief of the fisher people, ferried them across the river in his boat.
In the morning, the men and the women of Ayodhya saw Rama was gone, and they returned home as Rama had commanded.
The hijras, being neither men nor women, waited devoutly until Rama returned.
Inspired by: Sita: An Illustrated Retelling of the Ramayana by Devdutt Pattanaik
Notes: This story is on p. 83 of the book. In Valmiki's Ramayana, this is the Ayodhya Kanda (Book 2), sarga 40. In some versions, Sita puts on the clothes of bark as Rama and Lakshmana do; in other versions, she does not. For the legend of the hijras, or people of the third gender, see Wikipedia and also Transgender by Tarpit Patni. Pattanaik mentions the legend on p. 261. 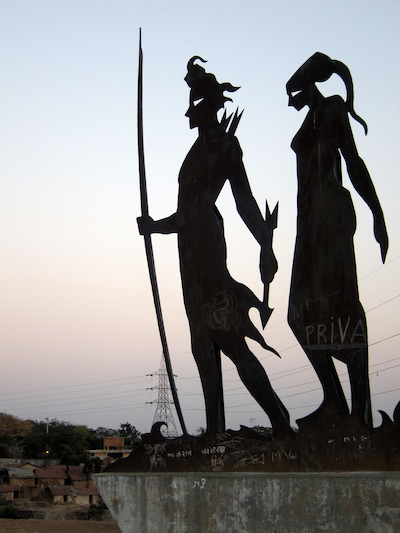