Laura Gibbs · 39. Another Story of Sita
But where did that baby come from? Here is one story:
Ravana kept the blood of warriors he had killed in a pot.
Meanwhile, a rishi kept sacred milk in a pot, hoping to acquire an incarnation of the goddess Lakshmi as his daughter.
Ravana stole that milk and poured it into the warriors' blood.
Horrified, Ravana's wife Mandodari drank the blood and milk, hoping to conceal Ravana's crime. Instead, she became pregnant with an incarnation of Lakshmi.
When the baby was born, Mandodari buried her in the ground far from Lanka.
Janaka discovered that baby.
He named her Sita.
Inspired by: Adbhuta Ramayana.
Notes: See the report in the Wikipedia article about Mandodari. You can read more about Gritsamada here. 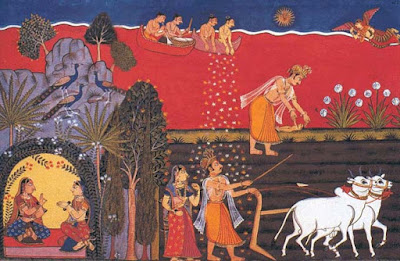 Sita in the furrow