Laura Gibbs · 40. Yet Another Story of Sita
This is another story about the baby in the field:
King Padmaksha had a daughter, Padma, an incarnation of Lakshmi.
Ravana attacked the kingdom and killed Padmaksha.
Padma jumped into her father's pyre, which transformed her into a jewel. Ravana put the jewel in a box and returned to Lanka.
Ravana's wife opened the box and found a baby inside. "She brings doom!" Mandodari shouted. "Take her away!"
Then the baby shouted, "I will return and destroy your kingdom."
Ravana buried the box in the ground far from Lanka.
Janaka discovered the baby inside the box.
He named her Sita.
Inspired by:  Ananda Ramayana
Notes: See the report in the Wikipedia article about Mandodari. 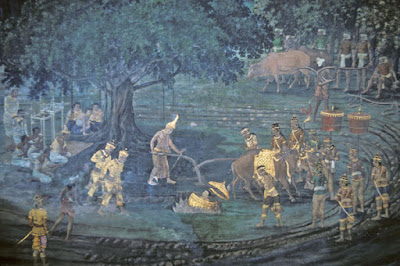