Laura Gibbs · 32. Rama Faces Tataka
Vishvamitra had brought Rama into the forest and taught him how to wield supernatural powers: arrows powered by the sun and moon, wind and lightning, air and fire, invincible weapons of the mind.
Then Tataka arrived. They could hear her voice shrieking ever louder as she approached the ashram.
"Kill her!" commanded Vishvamitra.
"But she is a woman," protested Rama.
"The enemy has no gender," replied Vishvamitra."Kill her now!"
Rama chanted a mantra and then launched an overwhelming arrow in the direction of her voice.
His arrow struck Tataka in the heart and she fell to the ground, dead.

Inspired by: Sita: An Illustrated Retelling of the Ramayana by Devdutt Pattanaik
Notes: This story is on p. 37 of the book. Valmiki's Bala Kanda (Book 1), sarga 27, has an enormous list of these supernatural weapons. attanaik notes that "in Kalamkari fabric paintings, Ram is shown facing the other way when he shoots Tadaka because the only woman Ram will see, other than his mothers, is Sita." Pattanaik notes that this is the first in a long train of violence against women in the epic: first Thataka, and then Shurpanakha, Ayoumukhi, Simhika, Surasa, Lankini, Mandodari, and Chandrasena (wife of Mahiravana). 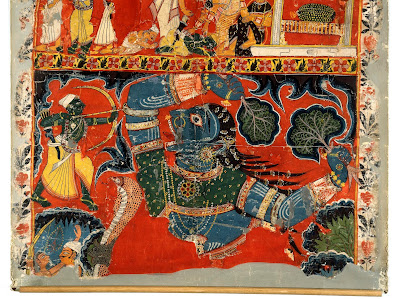