Laura Gibbs · 52. Manthara Persuades Kaikeyi
When Kaikeyi's maid Manthara heard that King Dasharatha planned to make Rama king, she poisoned Kaikeyi's mind against him.
"Kaushalya will be Queen Mother. You'll be her servant," Manthara hissed, "and your son Bharata will be Rama's servant. Use the boons that Dasharatha promised you: make him exile Rama and crown Bharata king instead."
Kaikeyi confronted Dasharatha. "I demand my two boons!" she said. "You promised!"
The king begged her to relent, but Kaikeyi insisted.
"I am bound to do what you ask," said Dasharatha, stricken with grief.
Thus he sent Rama into exile and agreed to make Bharata king.
Inspired by: Sita: An Illustrated Retelling of the Ramayana by Devdutt Pattanaik
Notes: This story is on p. 75 of the book. In Valmiki's Ramayana, this is the Ayodhya Kanda (Book 2), sarga 9. Other versions attempt to explain the actions of these characters in other ways. Pattanaiknotes that in the Adhyatma Ramayana, the goddess Saraswati influences both Kaikeyi and Manthara. In Bhavabhuti, Ravana's uncle Malyavan makes Shurpanakha possess Manthara, and so likewise in Murari's Anargha-Raghava. Kaikeyi sets the term of exile at fourteen years, and in the Assamese Ramayana this is because Kaikeyi knew of a prophecy that whoever sat on the throne during that time was doomed to die, and she was willing to sacrifice her own son to save Rama. 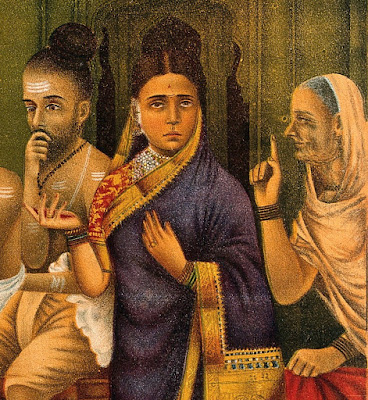