Laura Gibbs · 114. Anansi and Beetle
Anansi and Beetle were both courting the king's daughter.
"Bring your jars full of money," said the king. "She will marry the one with the most money."
Beetle filled a jar with money, but Anansi filled his jar with dung. Then he waited for Beetle.
"It's hot today," said Anansi. "Have a beer!"
"Thanks, Anansi!" said Beetle.
While Beetle was drinking, Anansi swapped the jars.
Then at the palace, Anansi poured out money from his jar, but Beetle just poured out dung.
"Disgusting!" shouted Anansi. "Clean it up, Beetle!"
And that's why Dung-Beetle is still rolling dung to this day.

Inspired by: Jamaica Anansi Stories by Martha Warren Beckwith
Notes: This is story 46 in the book. Beckwith heard this story from William Forbes; additional information in Beckwith's notes. Forbes calls the dung-beetle "tumble-bug" and the name "tumble-turd" is also used in Jamaican English. Dance has a version of this story where Tacuma tricks Anansi this way: Tacuma Wins the Girl. 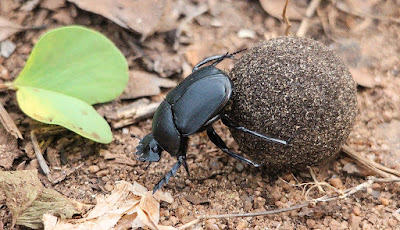