Laura Gibbs · 107. Anansi and John Crow
Anansi threw a big party, and John Crow was the best dancer there.
John Crow danced even better than Anansi, and that made Anansi mad.
As soon as the porridge was hot, Anansi said, "Dance on up here, John Crow, and I'll give you some of this hot porridge."
So John Crow went strutting up to the porridge pot.
Then Anansi grabbed the ladle and poured hot porridge on John Crow's head, and it stripped his head feathers clean off.
That's why John Crow has a bald head to this day: Anansi burned his feathers off with the hot porridge!

Inspired by: Jamaica Anansi Stories by Martha Warren Beckwith
Notes: This is story 47 in the book. Beckwith heard this story from Henry Spence; additional information in Beckwith's notes. Spence just says the "pop" was ready ("pop" is a variant spelling for "pap"), so I rendered that as porridge; more about porridges around the world at Wikipedia. Beckwith has another version of the story where Anansi christens John Crow with hot water, and that version also appears in Pamela Colman Smith's version which is about John Crow and all his family and friends: 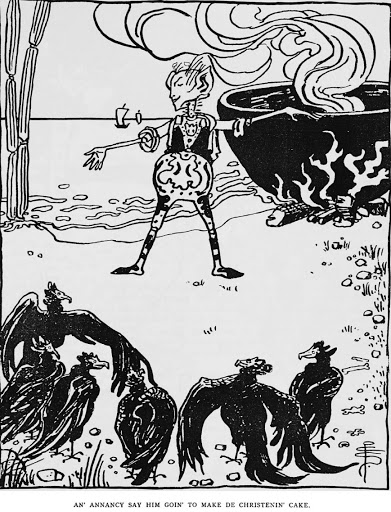 The "John Crow" is a red-headed turkey buzzard or "carrion crow" also called "cyancro" and "John Crow." Beckwith collected a song about Kyan-Crow: story 145. In Sherlocks "Anansi and the Old Hag," Anansi loses all his winnings when he makes fun of Turkey being bald. 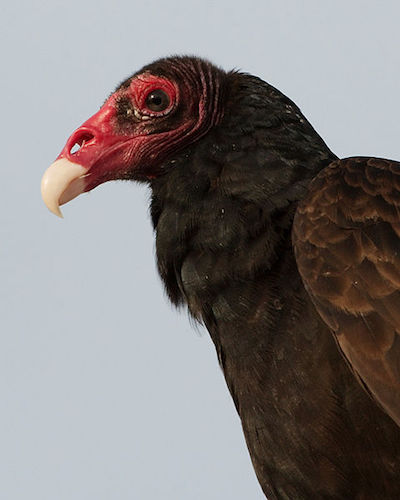