Inspired by: Valmiki's Ramayana (Bala Kanda).
Notes: Kheer is called by different names in different parts of India: kheer, payasam, firni, etc. Find out more at Wikipedia. It was my idea to have Kaushalya decide to share the kheer among the wives. As Devdutt Pattanaik notes in his book Sita (p. 16), the Ananda Ramayana reports that a portion of Kaushalya's kheer is taken by a crow and falls into Anjana's mouth, and she gives birth to Hanuman. In another version of the story, a crow takes part of Kaushalya's portion to Kaikesi, and she gives birth to Vibhishana. Just who ate how much kheer and in what order varies from version to version. In this version, Rama is born from half of the kheer, Lakshmana from one fourth, and both Bharata and Shatrughna from one eighth each. 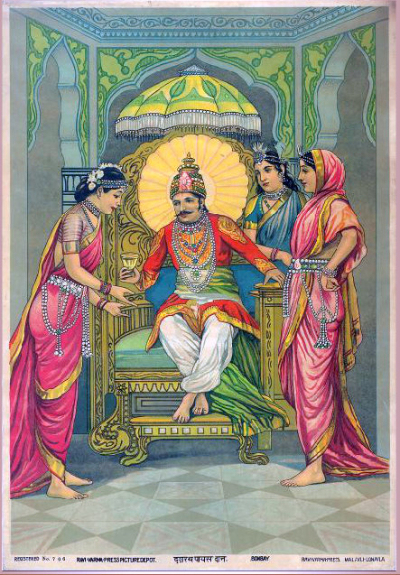