Laura Gibbs · 26. Baby Rama's Cosmic Form
One day Kaushalya left Rama in his cradle and went to offer prayers. She was amazed to find Rama there, eating the puja sweets! "How can he be both here and there?" she wondered.
As she stared, Rama displayed his cosmic form: infinite beings, millions of universes contained in every part of his body. All of time, all of existence radiated from him.
Kaushalya bowed her head. "O Lord, I beg you to let me forget what you have shown me here."
So Kaushalya forgot, and in obedience to his mother Rama never revealed his true form to her again.

Inspired by: Tulsidas's Ramayana.
Notes: This episode does not occur in Valmik's Ramayana, but it does appear in Tulsidas, and it such a great scene! Krishna makes a similar revelation to his foster-mother Yashoda, who sees the cosmic manifestation of Krishna when she looks inside the baby's mouth. Vishnu's cosmic form is called Vishvarupa, All-Form; learn more at Wikipedia. 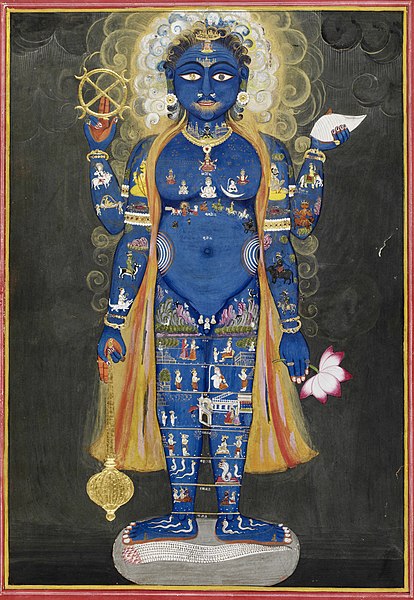