Laura Gibbs · 2. Ravana and Brahma
Seeking to become invincible, Dashagriva petitioned the god Brahma. He fasted and prayed for ten thousand years, chopping off one head every thousand years and casting it into the fire.
Dashagriva was about to cut off his last head when the deva appeared. "Ask any boon!" Brahma said.
"Protect me from devas and danavas, from nagas, from gandharvas, from..." Dashagriva's list went on and on, but he didn't include humans, as he considered them to be weaklings.
Brahma granted Dashagriva's petition, giving him a pot of immortal nectar which he hid in his navel.
Brahma also restored Dashagriva's lost heads.

Inspired by: The Ramayana (Uttara Kanda: Sarga 10).
Notes: At first, Ravana asks for immortality, and Brahma explains to him that he cannot grant that boon, so Ravana then asks to be invincible, listing all the creatures from whom he wants protection. His failure to ask for protection from humans is what will allow Vishnu to be born as a human, Rama, who can defeat Ravana. The story of the pot of nectar is included in Pattanaik's Sita, p. 49. 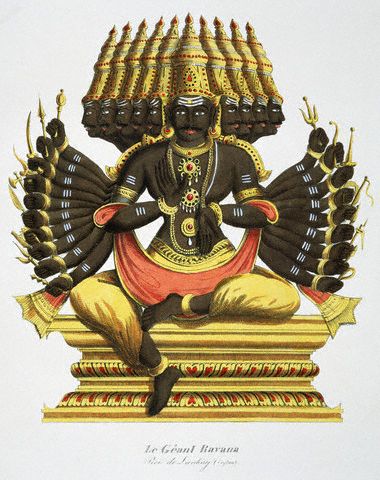