The Tortoise and the Monkeys

Tortoise knew the Monkeys hated him, and he didn't like that.
"Monkeys!" he shouted. "I'll show you where to find lots of honey!"
He led the Monkeys into a cave and then shouted, "Oh no! The roof is falling! Reach up your arms! Hold tight! I'll go get sticks to prop it up."
Then Tortoise left them there.
He didn't come back.
The Monkeys waited. And waited. They were thirsty. Hungry. Tired. Finally they put down their arms.
The roof didn't fall!
Tortoise had tricked them.
That's why Monkeys have thin haunches: they starved waiting for Tortoise to come back.
Inspired by: "Sankhambi Made the Monkeys Support the Cave" in The Bavenda by Hugh Arthur Stayt, 1931.
Notes: You can read the original story online. The original story is about "sankhambi," the Venda trickster; Stayt leans to the interpretation that sankhambi should be imagined like a tortoise, so I've gone with that identification. 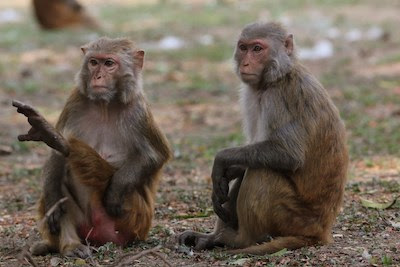