The Hunter and the Secretary-Bird

A hunter was surprised to find a secretary-bird in his snare.
"Spare me!" the bird begged him. "I'll repay you someday."
So the hunter freed the bird.
Later on, the hunter was waylaid by an enormous python.
"Give me your food!" the python hissed, and it ate the hunter's food. Still hungry, it ate the hunter's dogs. "I'm still hungry, so now I'm going to eat you!"
"Save me, secretary-bird!" shouted the hunter.
The secretary-bird came stalking out of the bushes. Terrified, the python slithered away before its enemy could catch and kill it.
The grateful hunter thanked the bird.
Inspired by: "The Hunter and the Bird" in Talking Animals by Wilfrid Hambly, 1949.
Notes: You can read the original story online. This is a story from Angola. The bird tells the hunter to summon him by the name "Cinjila." 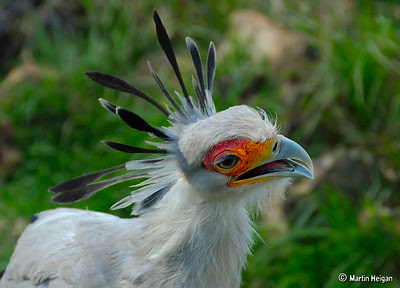