The New Wife and Her Stepson

A widower remarried, not knowing his wife was a shapeshifter.
When her husband went out, she grabbed her stepson's food. He fought back, so she became a wild animal and attacked him.
The boy climbed a tree, and the animal gnawed the tree until it fell and then began eating the boy.
"Help, Father!" he yelled.
When his father came running, the animal threw itself into the river, becoming a woman again.
The next day the father hid nearby and watched. It all happened again, and when his wife was busy gnawing the tree, the hunter shot and killed her.
Inspired by: "A Man With a Wife Who Could Change Herself Into a Wild Animal" in Umbundu Tales, Angola, Southwest Africa (in Journal of American Folklore) by William C. Bell, 1922, which contains the Umbundu text and the English translation.
Notes: You can read the original story online. In the original story, the woman has a of her own; it is the stepson she treats cruelly. The story does not say what kind of animal she becomes. Maybe a leopard? 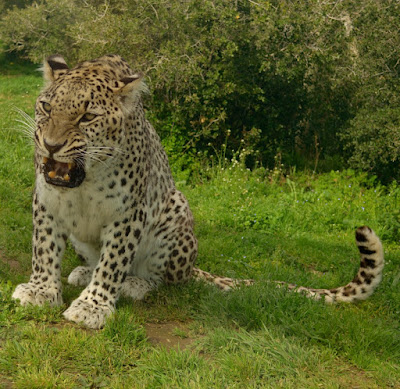 Email ThisBlogThis!Share to TwitterShare to FacebookShare to Pinterest
Labels: African, All Stories