The Foot of the Ox

A poor farmer had just one ox.
Ploughing one day, the ox struck something with his foot. It was a pot of gold! The man took the gold home and hid it.
Then he cut off his ox's foot. "Let it be food for the poor!"
People were amazed. "That is your only ox," they said.
"God gave me this ox so I could feed the poor," he replied. Then he butchered the ox, giving away all the meat.
His wife was angry, until he showed her the hidden gold.
They became rich, and always gave alms to the poor.
Inspired by: "The Farmer" in Ethiopian Folktales collected by Elizabeth Laird (website).
Notes: You can read the original story online. The storyteller is Fatima Ali. The story starts with him begging other people for an ox to plough with alongside his own ox; I left that part out to shorten the story. 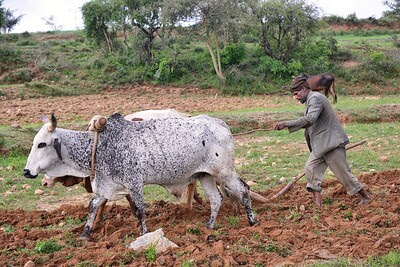