Mantis told his son-in-law, Rainbow, what had happened. "That man beat me badly!" Mantis complained. "How did he see me when he had no eyes?"
"Stay away from that man!" Rainbow said. "His name is Eyes-on-his-Feet. He has eyes between his big toe and the next toe."
Mantis then went looking for Eyes-on-his-Feet and found him again roasting meat. Mantis crept up silently and threw dust on the man's feet. Now the man couldn't see anything.
"I knew about your eyes last time!" Mantis shouted. "I just wanted to test your strength."
Then Mantis grabbed the meat and ran home.
Inspired by: Sigrid Schmidt's South African |Xam Bushman Traditions and Dorothea Bleek's Mantis and His Friends.
Notes: See the first part of the story here: Mantis and the Mysterious Man 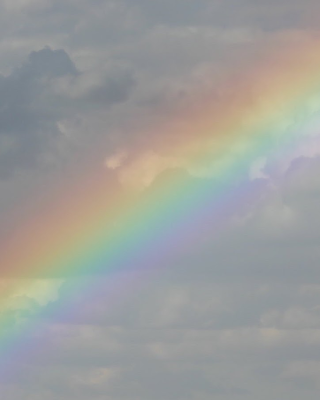 Rainbow in Namibia by Mara.