"I am going to go see Mother Aardwolf," said Rainbow.
"I'm coming too!" Mantis insisted.
"No," said Rainbow. "You always behave badly. You cannot go."
So Rainbow went to see Mother Aardwolf, but Mantis followed him, hiding in the bushes so that Rainbow would not see him.
He watched Rainbow kindle a fire. Then Rainbow shouted, "Great Mother Aardwolf, please feed me!"
Mother Aardwolf held out a young aardwolf which Rainbow took and roasted on the fire. Then Rainbow put out the fire and packed the meat in a bag to take home to his family.
Mantis saw it all.
Inspired by: Sigrid Schmidt's South African |Xam Bushman Traditions and Dorothea Bleek's Mantis and His Friends.
Notes: This is 3b7 in Schmidt, Mantis and Mother Proteles. It is The Mantis and the Proteles in Bleek. You can see the continuation of the story here: Mantis Visits Mother Aardwolf, and you can read more about the aardwolf at Wikipedia. 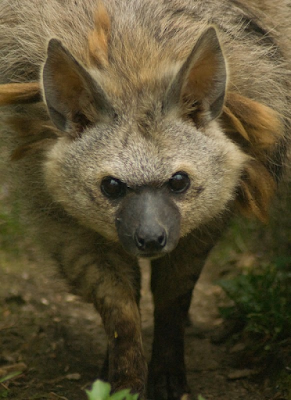