Mantis wanted to eat an aardwolf too. He waited until Rainbow left, and then Mantis also kindled a fire.
"Mother Aardwolf!" Mantis shouted. "Feed me!"
Mother Aardwolf held out a young aardwolf. Mantis reached out to take it, but then Mother Aardwolf grabbed Mantis and threw him into the fire.
The fire burned Mantis all over. He screamed and flew away, plunging himself into some nearby water to extinguish the flames.
When Mantis got home, Rainbow saw he was burned. "You most show respect for Mother Aardwolf," Rainbow told him. "Now you know how she punishes anyone who is greedy."
Inspired by: Sigrid Schmidt's South African |Xam Bushman Traditions and Dorothea Bleek's Mantis and His Friends.
Notes: Here is the first part of the story: Rainbow Visits Mother Aardwolf. 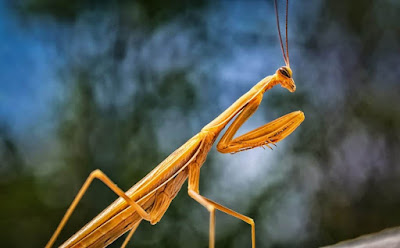