Mantis and the Magic Ostrich

Mantis was hunting and saw a big ostrich. He shot an arrow at the bird, but the arrow bounced off. How strange!
Mantis approached the ostrich. "Will you give me an egg?" he asked.
"You may take one egg," she said, showing him her nest.
But Mantis was greedy. He shoved all the eggs into his carrying-net and ran.
Mantis then stopped to eat one of the eggs, but it stuck in his mouth. He grabbed his drinking-brush; it stuck to his hand. His carrying-net stuck to his back. So did his bow and his arrows. Everything stuck to him!
Inspired by: Sigrid Schmidt's South African |Xam Bushman Traditions and Dorothea Bleek's Mantis and His Friends.
Notes: This is 3b8 in Schmidt, Mantis and the Magic Bird, with the same title also in Bleek. You can read the continuation of the story here: What Mongoose Said 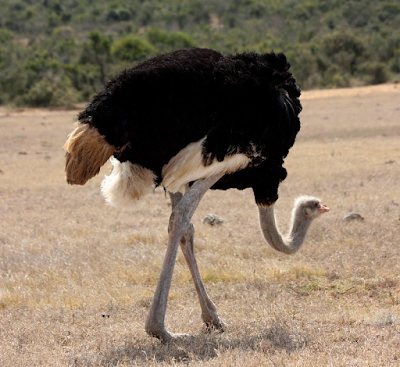