The Fox and the Donkey

A donkey found a lion skin that had fallen off a merchant's cart. Delighted, the donkey put on the skin, and then roamed the woods, terrorizing the other animals. They really thought he was a lion, running away as soon as they saw him. The donkey started to think he actually was a lion!
The fox was terrified when she saw him, but just as she was about to run away, the donkey decided to roar. "Hee haw! Hee haw!"
The fox burst out laughing. "You scared me at first, Donkey!" she said. "But then you opened your big mouth."
Inspired by: Mille Fabulae et Una, a collection of Latin fables that I've edited, free to read online. I am not translating the Latin here; instead, I am just telling a 100-word version of the fable.
Notes: This is fable 56. Vulpes et Asinus Pelle Leonis Indutus in the book, which is Perry 188. 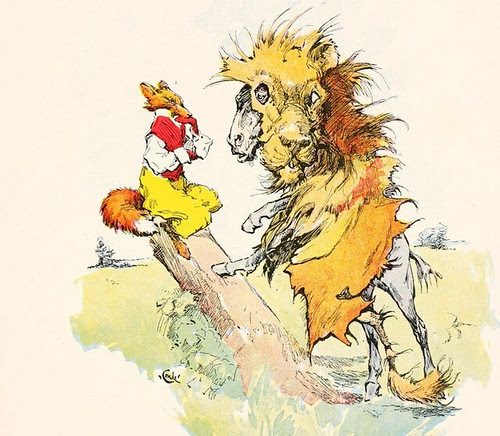