Laura Gibbs · 190. The Pandavas Depart
The sons of the Pandavas died in the war, but one grandson survived: Parikshit, the son of Uttara and Abhimanyu, who was the son of Arjuna and Krishna's sister Subhadra. Ashwatthama had launched a weapon to kill Parkishit while still in his mother's womb, but Krishna saved him, and Parikshit later became king in Hastinapura.
Then, after Parikshit's coronation, Yudhishthira, his brothers, and Draupadi resolved to climb Mount Meru, seeking heaven. After the loss of Krishna and Balarama, they no longer had any desire to remain in this world.
Dressed in clothes of bark, they departed on their final journey.

Inspired by: Jaya: An Illustrated Retelling of the Mahabharata by Devdutt Pattanaik.
Notes: This story is on p. 333. 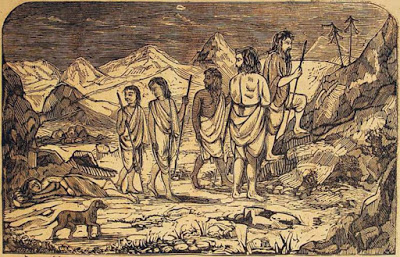