Laura Gibbs · 97. A Python Captures Bhima
One day, a python grabbed Bhima. As Bhima struggled, the snake said, "I was King Nahusha. I took Indraloka from Indra. I also took Indra's queen, Shachi. But she tricked me: she said the Saptarishis must carry me to her on a palanquin, and when the rishis walked slowly, I kicked one in the head. He cursed me to live as a python until someone named Yudhishthira freed me."
"Yudhishthira's my brother!" Bhima shouted.
"You're jussssst ssssssaying that..." hissed the python.
"Help!" Bhima yelled.
His brothers came running and, at Yudhishthira's touch, Nahusha shed his snake-body and ascended to heaven.
Inspired by: Jaya: An Illustrated Retelling of the Mahabharata by Devdutt Pattanaik.
Notes: This story is on p. 187. You can read more about Nahusha at Wikipedia. 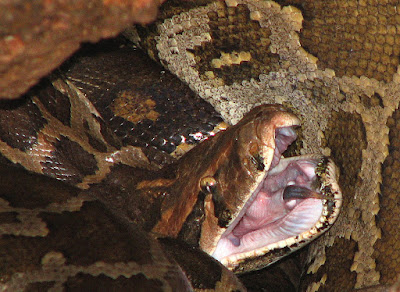