Laura Gibbs · 115. The Pandavas Reveal Themselves
Soon after the cattle-raid, King Virata was surprised to see Kanka sitting on the royal throne, with the cook and the dancing teacher beside him, plus the cowherd and a stableboy, and even his wife's maid, dressed up in royal robes.
Suddenly, it all made sense. "King Yudhishthira!" he exclaimed, bowing.
"Our exile is over," Yudhishthira said, smiling. "We hid ourselves here for the thirteenth year."
Virata then offered his daughter, Uttarai, Uttara's sister, in marriage to Arjuna, but Arjuna proposed instead that his son Abhimanyu marry the princess. Thus King Virata became an ally of the Pandavas by marriage.
Inspired by: The Mahabharata: A Shortened Modern Prose Version by R. K. Narayan
Notes: This story is from Chapter 11: Warning Shots. I have spelled the name of the princess Uttarā as Uttarai, following Narayan's practice, helping to distinguish her name from the name of her brother, Uttara (his name ends in a short a vowel, while her name ends with the long vowel). In Devdutt Pattanaik's Jaya, he uses the spelling Uttari. 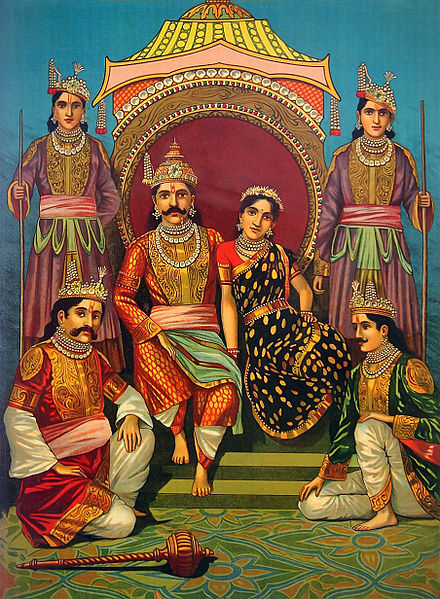