Laura Gibbs · 101. The Pandavas Are Reunited
After years spent acquiring weapons, Arjuna joyfully rejoined his brothers. Their long exile was easier to bear when they were all together.
Duryodhana, meanwhile, was troubled when he heard about Arjuna's newly acquired weapons.
"Fear not," said Shakuni. "They are beggars, nothing like the princes they once were. Take your most magnificent army now, before they enter their year of disguise, and show them your might and power!"
"I like this plan," Duryodhana said, smiling.
Duryodhana then marched an army into the forest and set up camp with music and merriment, sending a messenger to his cousins with an invitation.
Inspired by: The Mahabharata: A Shortened Modern Prose Version by R. K. Narayan
Notes: This story is from Chapter 8: Wanderings. 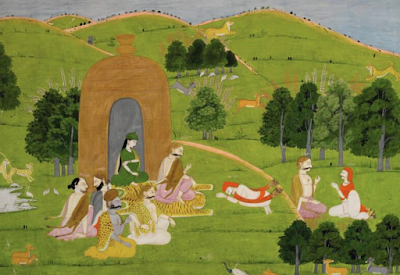