Laura Gibbs · 185. The Elders Go into the Forest
Eventually, Dhritarashtra left Hastinapura, together with Kunti and Gandhari. They lived in the forest.
One day there came a forest fire.
Even then, Gandhari didn't remove her blindfold. She had removed her blindfold only once, attempting to use the power of her gaze to make Duryodhana invincible. "Come to me naked," she told him. Duryodhana, however, was embarrassed and wore a loincloth. All that Gandhari saw became invincible, but Duryodhana was still vulnerable.
She had not been able to save him, and she had no wish to save herself.
"Run!" Dhritarashtra shouted.
"Why?" replied Gandhari.
They died in the fire.
Inspired by: The Mahabharata: A Shortened Modern Prose Version by R. K. Narayan
Notes: This story is from Chapter 17: Epilogue. The story about Gandhari's gaze is a folktale not found in the Mahabharata, and it is not included in Narayan's book. It appears in Pattanaik's Jaya on p. 281; in that version, it is Krishna who prompts Duryodhana to feel ashamed and cover himself, thus undermining the power of Gandhari's boon. 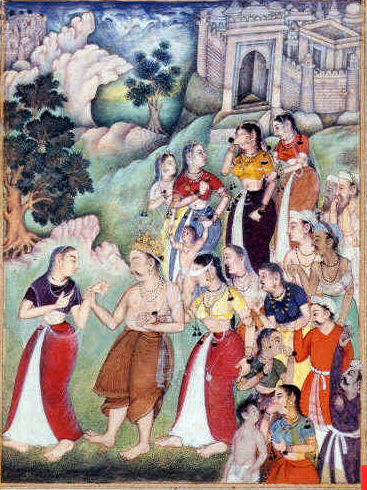