Laura Gibbs · 189. Krishna Tells Jara a Story
Before Krishna died, he revealed to Jara the truth of his birth. "We met before, during the Treta Yuga: you were born as Vali, king of the monkeys of Kishkindha, and I was born as Rama, prince of Ayodhya. Because of a promise I made to your brother Sugriva, I shot you with an arrow from an ambush, just as you shot me now. All is as it must be."
Krishna then left his body and returned to Vaikuntha, his heavenly abode.
Thus the Dvapara Yuga ended, and the Kali Yuga began, the final era in the cycle of time.
Inspired by: The Mahabharata: A Shortened Modern Prose Version by R. K. Narayan (for the death of Krishna).
Notes: Narayana does not mention the legend of Jara as Vali, but it is a well known and popular legend today: Vali reborn as Jara. 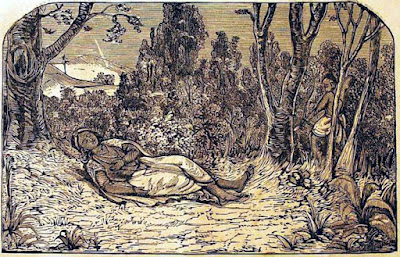