Laura Gibbs · 5. The Story of the Vasus
Prabhasa, chief of the Vasus, had coveted the wish-granting cow of the rishi Vashishtha. Together with the other Vasus, Prabhasa stole the cow, but Vashishtha caught them and cursed them. "You will be born on earth as humans."
The Vasus begged Ganga to be their mother on earth and drown them, making their lives as short as possible.
Ganga agreed. She became the wife of King Shantanu, and she drowned their children as soon as they were born. But when the eighth child was born, Shantanu stopped her.
That eighth child was the incarnation of Prabhasa.
Shantanu named him Devavrata.
Inspired by: The Mahabharata: A Shortened Modern Prose Version by R. K. Narayan
Notes: This story is from Chapter 1: The Eighth Baby. It's actually Prabhasa's wife who instigates the theft, demanding that her husband steal the cow for her. 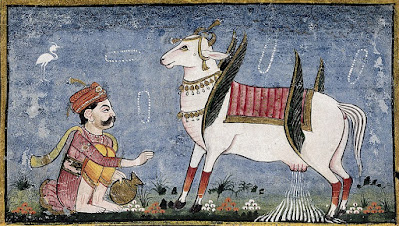